Sooooooo…I’m a Baby Boomer. Our kids are Millenials. None of us fit the stereotypes perfectly, but there you have it.

I admire the younger generations. For the most part, the ones I know are more concerned with being healthy, doing things outdoors, and not collecting as much “stuff” as we have. The downside is they can’t go anywhere without their phones, which they don’t use to talk on, and their penmanship is nonexistent.

My generation has spent the first half of our lives collecting stuff, and now in the second half, trying to figure out what to do with all of it. I never wanted a big house…growing up I loved my great-grandma’s house. By the time I knew her, great-grandpa was gone, and she lived in an old farm-house alone. The rooms had high ceilings, and heavy old drapes that made the rooms seem dark and musty. She had a creaky iron bed with a fluffy down comforter. I got to sleep with her in her bed when we visited.

She had hurt her ankle years before in a streetcar accident and still kept it wrapped in a bandage. I don’t remember anything she said to me, but I remember her warmth. By anyone’s standards, she was poor. Nothing lavish in any part of the house, in any meal she fixed, only in her love for us. I suspect that was why my mom took us to visit her. It wasn’t for us, or even for great-grandma, it was for my mom. My mom hurt, a lot. She still hurts. Growing up with pain, living pain, running from pain…that’s my mom’s life.

I realize now that each woman had pain. One woman chose to ignore her pain, and love. The other chose to bury herself in it, and suffer.

Great-grandma had the greatest screen door from her kitchen to the outside yard. 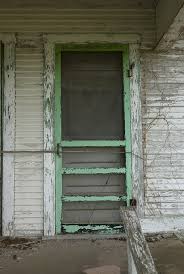 That sucker had a spring on it that made it slam with the greatest bang you ever heard. The door had seen better days, part of the screen was detached from the frame, the paint had worn off, and even some of the wood was splintered. But that spring! I want one of those doors someday. That’s my dream. I want to hear that sound again, on a hot summer day, banging away, with kids running in and out.

That screen door reminds me to be tough when the pain of life tries to take over. NOPE! Not my heart! Get out! Let the fresh air in. Let my kids, and anyone else run through with laughter, with surprise, with a fond memory.

No reason to stop the world…I have my screen door.